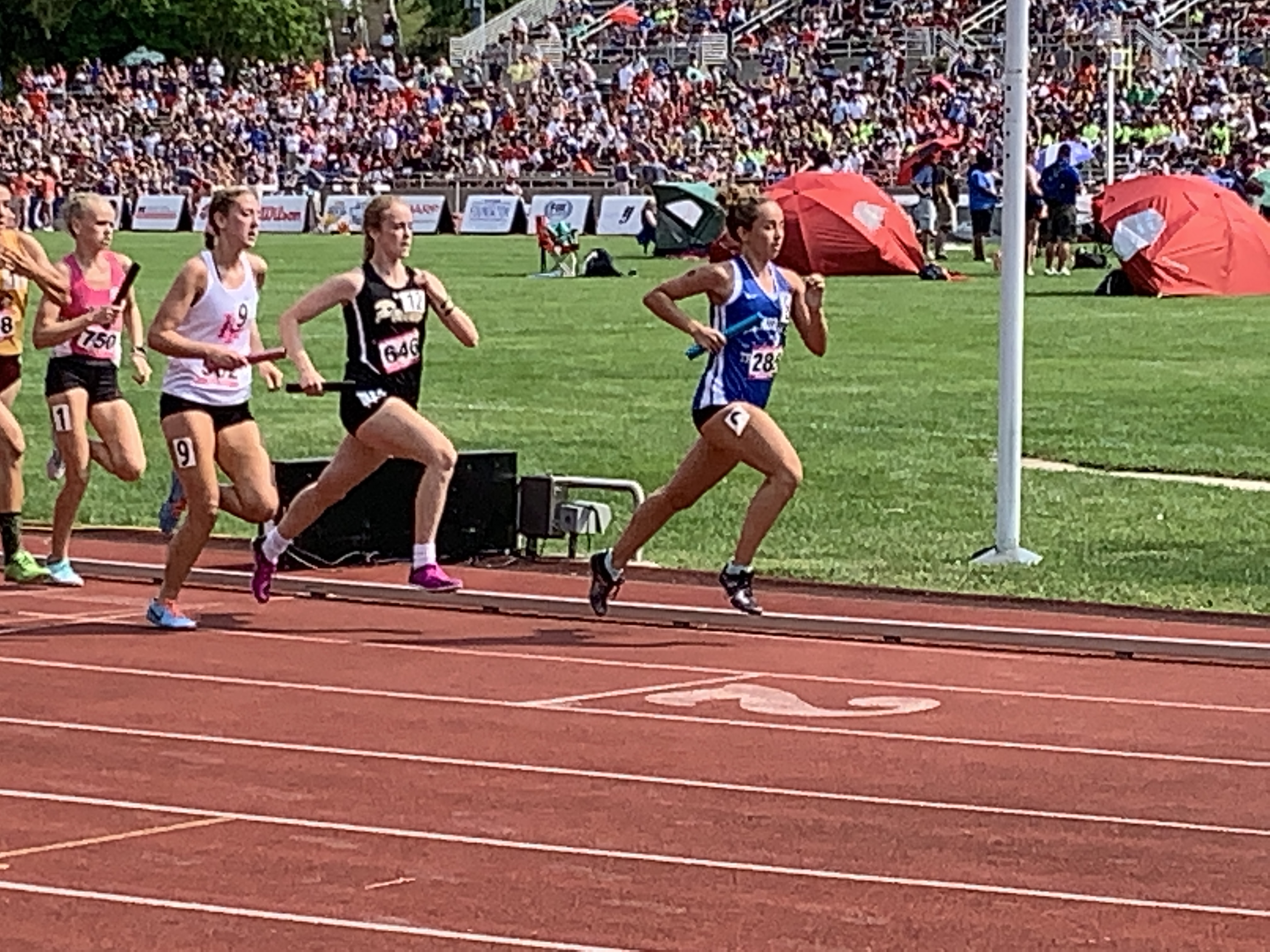 Over 400 participating IHSAA schools attempt to make to the 32 Indiana Regional meets, and then only the top 3 Regional finishers in each event have the opportunity to compete at the State Finals. One-hundred and fifty schools sent at least one athlete to the State Finals, and 64 schools scored at least one point. Memorial sent 10 Tigers to compete in 4 events, and represented Evansville and Memorial well scoring in the first and last running events of the evening earning a total of 4 points.

Seve Felker (featured image), was the only Senior in a 4x800m Relay tandem that started the afternoon with a 7th place finish in a school record 9:22.71. Juniors Allison Morphew and Mallory Wittmer along with Freshman Jacqueline Brasseale joined Felker in Memorial’s school record-setting run.

Jacquline Brasseale ran again in the 1600m race, and of 27 runners, Brasseale was seeded 27th. Brasseale outran 9 other milers and finished in 5:13.25 and earning 18th place. Brasseale can boast that she is the 2nd fastest Freshman miler in the state as the only Freshman in front of her was also in front of everyone else. Freshman Addison Wiley from Huntington North earned her State Champion title running a blazing 4:46.93.

Memorial was represented well in the 800m with 2 Tigers qualifying to run as part of the 27 fastest half-milers in the state. Senior, Claire Sievern, finished 15 with a 2:18.03, and Memorial’s Regional Champion Allison Morphew gutted out a 25th place finish running injured with a time of 2:27.47. With one more event for the injured Morphew, Memorial knew they’d need an alternate runner. Pike’s Senior Elizabeth Stanhope was the State Champion breaking the State record running 2:06.62

The final event of the evening was the 4x400m Relay. There were 2 heats, and everyone was running fast. For perspective the final times has 20 teams running faster than Memorial’s personal record (PR) of 4:04.08. And now Memorial had to decide on an alternate runner for the injured Morphew! Freshman Jacqueline Brasseale has already run the 4×800 relay and the 1600m, but the team agreed that Brasseale was the best choice for this final event.

Senior stars Ellen Hayhurst and Claire Sievern along with Junior Mallory Wittmer lined up with Freshman alternate Jacqueline Brasseale and just ran their brains out earning a 9th place finish, a PR, and school record-setting time of 3:58.51. Homestead’s tandem was over 3 seconds faster, but was disqualified for running inside the lines. The misfortune was just what the Tigers needed to earn their first metal ever in the 4×400 Relay. North Central dominated this event breaking the meet record by over 3 seconds with a crazy-fast time of 3:43.99.

Special thanks to the coaching staff and their spouses, teammates, parents, family, and even Memorial’s Principal Sally Sternberg who came to support the team with her two girls when she should have stayed home in bed to recover from her illness.

The Memorial Girls’ Track & Field program is proud to come home from the State scoring in 2 events, 2 new school records, and metals for EVERY Tiger that competed at State! Prouder still is that 18 of the 43 Tiger stars earned All-City Academic honors.

Our goal was simple. “Good to great.” Each student-athlete working to be a little better than yesterday. Looking forward to our tomorrows. See you on the track.