Read Below for a Tiger Coach Spotlight on Larry Mattingly.

Tell us about yourself:

5th of 6 children of Larry and Betty Jo (Franzman) Mattingly.  All 6 of us graduated from Holy Rosary and MHS, and 14 of our 16 combined children have graduated from MHS.

I graduated from MHS in ’80, attended Xavier University in Cincinnati for 3 semesters and graduated from ISUE/USI in ’86 (BS in Social Sciences) and ’94 (MS in Secondary Education).

Hired at Memorial upon graduation from USI and have been here since—35th year.

Why did you decide to become a high school coach?

When I came home from Xavier in the spring of ’82, some softball teammates of mine were coaching 9 and 10 year-old football at Lakeview Optimist and invited me to help them.  I was going to attend ISUE in the fall of ’82 and thought that sounded like fun.

Well, I ended up with my own team and got a couple of MHS classmates (Kerry Mattingly and Bob Brandt) to help me. I started classes at ISUE at the same time and an education professor named Glenn Kinzie, who was very involved in Lakeview Optimist, took an interest in me.  Dr. Kinzie and my oldest brother Mark (MHS ’66) convinced me to switch from business to education.  I coached various sports at Lakeview over the next four years and felt I would like to teach and coach in a high school.

What is your coaching style or philosophy?

My coaching style or philosophy is what I would term “still evolving.”  I guess my main goal is to try to get young men to give of themselves to something bigger than themselves.  That, and being grateful to the parents who entrust me with their sons at such an important age.

A good friend of mine, Kenny Zuber, has helped me with wrestling for over 20 years.  He always tells the boys that the payoff for sacrificing yourself to a team will come later in life.  I like that and hope that I impart to young men the benefit of athletics as they compete to get into schools, for jobs and face adversity as they move on. 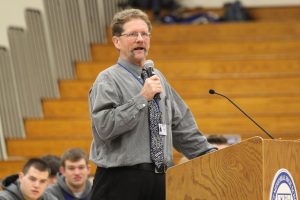 Who is your favorite coach and why?

My coaches in high school were Gene Logel, Ralph Weinzapfel and Quentin Merkel.  They also coached my brother, David, who was 9 years older than me and something I wasn’t—a very good athlete!  I went to all his games and worshipped these men that my brother talked about so frequently.  Another man that fell in the category of the above three gents was Ron Wannemuehler, who coached my brother in basketball.

I not only got to experience Logel, Weinzapfel, Merkel and Wannemuehler in high school as teachers and coaches, but was also mentored by all as a teacher/coach at Memorial.  Everyone should be so fortunate!

My second year at Memorial, I became the freshman football coach.  My “assistant coach” was Len Will.  I knew that he was an All-American football player at Columbia in the late 30’s and that he was the first head football coach at Mater Dei.  Well, the connections to Coach Will were incredible.  Coach Logel always talked about the influence that Coach Will had on him when they coached together at Mater Dei in the 50’s.  While at Mater Dei from ’52 to ’56, Coach Will and Coach Logel coached Coach Weinzapfel and Coach Wannemuehler.  Both Weinzapfel and Wannemuehler talked of the influence Will and Logel had on them.  Logel then went to Memorial where he coached Coach Merkel, who always spoke of the incredible influence that Coach Logel was on him!

Well, to me, Coach Will was the “great mentor of great mentors.”  Working with him for five years I came to understand why four great men spoke so highly of him.  I feel blessed beyond words to have had the opportunity to learn from these “giants.”

What is your favorite moment in your athletic career?

That’s easy—-there weren’t many memorable ones!! I wrestled one year and played football for four.  Wasn’t very good at either!  However, I did get to play some football in a back up role my senior season and recovered a fumble against Jasper.  Our only score came after that and we beat them in overtime, 14-12.

Do you have any success stories from coaching an athlete?

Several—many great young men that overcame my coaching to still achieve incredible accomplishments in football, wrestling and life!!  So many great guys, so many great memories.

To name one, I’d have to say Darin Willis.  Darin lost his father during his middle school years at Holy Spirit.  Running the feeder wrestling league, I got to know Darin as an eighth grader at Holy Spirit.  I talked to him often about playing football and wrestling at Memorial—both of which he did for four years.  He never became a starter in football, but was thrust into the wrestling lineup as a sophomore.  He didn’t win a match on the mat.  His junior season he not only won more than he lost, he won deciding matches in three dual meets that helped us set a then-school record in wins.  His senior season, he won thirty matches and was a force.  He followed that up by winning a gold medal at the Disney Duals in Florida before heading to Parris Island to become a Marine.

Did you participate in your sport in high school and college (if so, where)?

I did wrestle one year and put myself in the record books!!  I went 0-9 and was pinned in the first period of every match.  I scored one point when a guy threw a full nelson on me.  I am the worst, and least successful, wrestler in MHS history.

Is this a great place or what?  I have had the privilege to work with several medal winners, a state champ and two college All-Americans!

What other sports or activities do you enjoy playing or practicing?

At my age, horse racing, clabber and poker!!  Seriously, I do still enjoy jogging, but long ago gave up softball, basketball etc.

What’s your mantra or favorite saying (in the context of sport and/ or life)?

From Dennis Heathcott, I got my favorite saying:  “Attitude is Everything.”  I’ve taken poetic license and added to that………..everything is an opportunity and if you’re a competitor you need nothing more.  Thus, all a good competitor needs is a good attitude!  A person can’t control a lot of things, but their attitude is something they can control!

What team do you root for most enthusiastically?

The Memorial Tigers!!!  After that, the Cincinnati Reds!!

Princeton Invitational
10:00 am
View All Events