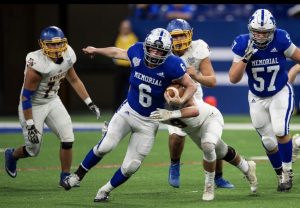 Brock Combs, Reitz Memorial Class of 2020, has committed to play Football for Marian University in Indianapolis, IN. At Memorial, Combs has earned himself a list of stats and highlights, playing both defensive line and running back. Coming in at 6’1” and 225lbs, he’s a force to be reckoned with. Brock is the only player from Southwestern Indiana to be named a Prime Time 25 Player and on the cover of the 2019 Indiana Football Digest. He was a three-year starter on the defensive line, started three consecutive State Finals and is a two-time State Champion.

Brock’s 2019 season stats & highlights include: 82 tackles, 2 interceptions (1 returned for a touchdown) and a fumble recovery. His team high was 34.5 tackles for loss and 15.5 quarterback sacks that lead all of Class 4A and were second in both categories in all Classes in Indiana. On offense, Combs lead the Tigers in rushing with 576 yards on 70 carries and 7 touchdowns. In the 2019 Tournament play, he had 423 yards rushing on 34 carries and 4 touchdowns. Brock’s defensive career stats are an impressive 258 tackles, 57.5 tackles for loss and 34 quarterback sacks.

Brock will sign his National Letter of Intent on February 6, 2020 at 3:00 PM on the first floor of Reitz Memorial High School (outside of the cafeteria).