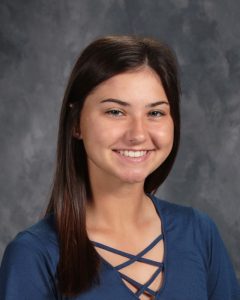 Mallory Russell, Reitz Memorial High School class of 2020, has committed to play golf at the University of Evansville.

At Memorial, Mallory was a four-year letter winner in golf and basketball, three of which she played in the number one position for golf. She has won SIAC two times in her high school career, once freshman year and once junior year. She holds the regional low round at country oaks golf course with a 66 (-6), helped the team advance to state 4 years in a row, and has placed in the top 30 every year. At Memorial, Mallory is the co-president of Tiger Pride, a member of National Honor Society, two-year captain of the basketball team, and one-year captain of the golf team.

Mallory has also been a part of many foundations outside of Memorial golf that have helped her become the player that she is today – winning tournaments in Evansville Junior Golf, Indiana Junior Golf, and Golfweek Junior Tour. Independently she has also competed in bigger tournaments such as American Junior Golf and United States Junior Golf.

Mallory plans to study nursing at the University of Evansville and is excited to start her career as a Purple Ace. She will sign her National Letter of Intent on Thursday, November 21 at 3:00 PM on the first floor of Reitz Memorial High School (outside the cafeteria.)