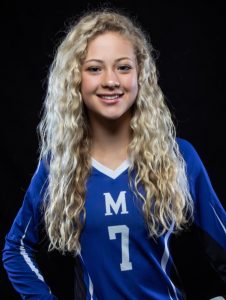 Reitz Memorial student-athlete, Rachel Basinski (class of 2020), has given her verbal commitment to play volleyball for the University of Evansville Purple Aces.

Rachel is entering her Senior year, and for the second year starting at the varsity libero position with the Tigers, under Coach Andi Allford.  She helped lead her team to a combined 50-13 record and 16-2 in conference play with a 2017 Sectional title.  She is an Evansville United club team member and was invited to play with the USA Volleyball A1 Continental teams in the National tournament in 2018.  Rachel was also named to the SIAC VB 1st team in the 2018 season and named to the 2019 IHSVCA coaches pick for player to watch. Rachel has also been a varsity starter for the Memorial Golf team, and last year helped to lead the team to the State Finals in Indianapolis where the team placed 13th in State.  This year Rachel won the Evansville Junior Golf Associated City Tournament and placed in 10th in the Championship division in the Evansville Women’s City Golf Tournament.

Rachel is excited to continue her volleyball career in the Evansville area under Coach Fernando Morales.