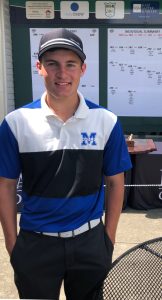 Reitz Memorial student-athlete, Ben Hoagland (class of 2020), has given his verbal commitment to play golf at the University of Michigan.

Hoagland was a member of the RMHS boys golf team this past spring as a junior.   He was named all city & all conference by winning SIAC with a 63 (-9).  He advanced as an individual through IHSAA sectionals and regionals shooting 72 (E) and 69 (-3), respectively. Eventually, placing T12 at the IHSAA State Finals shooting 75, 74 (+5 for the two days).  He also was awarded academic 1st team all city and all conference.
This summer Hoagland has participated in many state and national events including the Indiana State Amateur Championship and The Bubba Conlee National Invitational tournament. Most recently he played in the Indiana Boys State Championships at Purdue finishing T7 in the stroke play portion with scores of 73,72. Ben ultimately advanced to the round of 16 in the subsequent match play.
Hoagland will sign his National Letter of Intent on Tuesday, November 19 at 3:00 PM on the first floor of Reitz Memorial High School (outside of cafeteria). He plans study Business Administration at the Michigan Ross School of Business. His parents are Lee and Julia Hoagland, and has a younger sister, Emi.
Tigers Official Sponsor
Jan
27