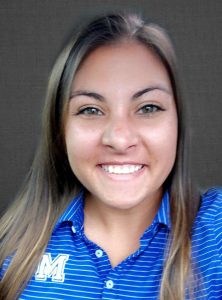 Bourne is beginning her fifth year in interscholastic coaching. Last year she coached alongside Grant Saylor for the Girls team. She was also an assistant coach for Mt. Vernon’s girls and boys swim teams from 2016 to 2019.

Bourne is a Mt. Vernon High School class of 2012 graduate. She was a two-sport athlete during her high school career where she completed in the pool and on the golf course. She also played softball for two years of her high school career. Bourne lettered all four years for the golf team, and three years for the swim team. She was an honorable mention for the Big 8 conference her junior year and made the All-Conference and Academic All-Conference her senior year. She earned Most Improved honors her sophomore year, as well as MVP/Low Average her junior and senior years. She also qualified for Regionals during her junior and senior seasons.

Bourne competed in Evansville Junior golf as well as Indiana Junior golf from the age of 13 to 18. She has participated in many camps including the late “Tom McNamara’s golf camp” as a participant, and later as an instructor to increase her knowledge about the game of golf. She attended “The Grand Cypress Academy of Golf” in Orlando, Florida four summers.  Bourne loves teaching and coaching the game of golf to people who are willing to learn the game. She is very passionate about the sport that she grew up playing.

“Kendyl comes highly recommended by past coaches and the golfing community,” said Athletic Director Matt Weber. “We look forward to having Kenyl continue her service to Reitz Memorial High School in the position of Head Varsity Girls Golf Coach.”